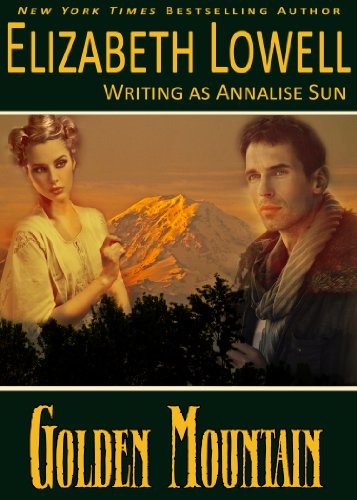 "I've read Elizabeth Lowell's books for longer than I care to admit, and whether she's writing suspense, mystery, science fiction, epic sagas or pure romance, her books are always engaging and exciting with characters you can't help but root for. Golden Mountain is no exception."

In the 1890s, Seattle was a raw city suspended between the modern power of the East Coast and the ancient power of China.

Cassandra Thornton was a rarity among young women—unmarried, self-supporting, independent. Innocent. In one day her life changed.

Jared Duran was a compelling man of intense passion, discipline, and intelligence. He told Cass that her unknown half-sister, Tea Rose, was being kept captive in a Chinatown pleasure house, and offered to help her free Tea Rose from her silk-lined slavery.

Kingston Duran was Jared’s brother. Like Jay, King had deep passion, but all he truly loved was the quest for gold. Yet women found the wildness in him irresistible.

Tea Rose was a child, but she was no innocent. Trained in the arts of the “flowery battle” between Yin and Yang, woman and man, she had learned that sexuality was a weapon. And she used it well.

The tangled lives of the Durans and the Thorntons led them from the gutters of Seattle to the savagery of the Klondike gold strike—and to an understanding of the many kinds of love.

BONUS: This novel has been revised and edited by Elizabeth Lowell and includes excerpts from two additional historical novels, GOLDEN EMPIRE and REDWOOD EMPIRE.