OBSERVATIONS FROM THE DRIVER

OF THE ELIZABETH LOWELL BUS

ALONG THE “LONELIEST ROAD IN AMERICA”

SNAKE VALLEY, ON THE UTAH-NEVADA BORDER—This is the Interior West, the inspiration for many of Elizabeth Lowell’s best-loved stories.

Not surprisingly, it is the land that she and I love.

We bought our new Conestoga Wagon, an Itasca Meridian RV with 400 diesel horses instead of four oxen, so we can spend more time in this spare, dry, beautiful land. Don’t think we are pioneers. We have all the comforts of the 21st Century – from high-speed internet (some of the time) to hot running water. Tempurpedic bed, too.

But we also have the ability to understand more deeply how our characters and our culture are formed by the Wide Open Spaces of the West.

We also love the people who are still here, who still live close to the bone, who have some of the comforts of today but who celebrate and cling to many of the old ways.

Take, for instance, 15-year-old Christian Conrad, who has an IPhone and video games but who enjoys, as well, the life of a horseback hero of the old west. He took this photo a month or so ago: 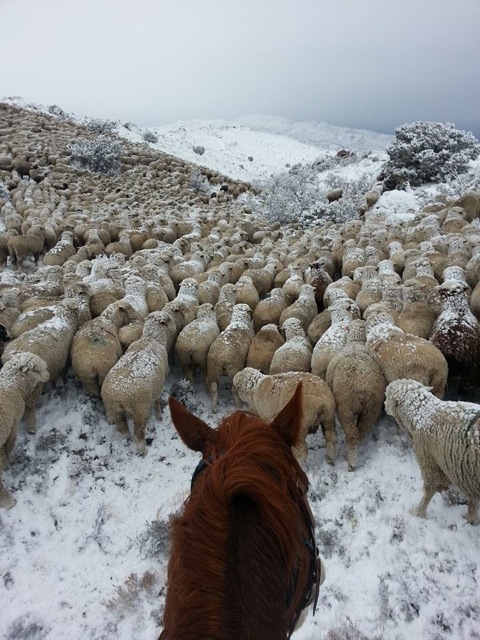 Christian took the picture one morning while trailing a herd of sheep up a draw in a snowstorm. Just doing his daily work, just capturing a way of life that hasn’t disappeared.

He lives in Baker, NV and his mother, Chandra, works in the Bordertown Café where Elizabeth (Ann) and I had breakfast.

Half of Bordertown, the slot machines, the bar and the café, are in Nevada. The convenience store and the gas pumps are a few yards away in Utah. But the parts are entirely compatible because they are all in the Snake Valley, a thirty-mile wide basin between two mountain ranges.

Snake Valley has been home to vast herds of sheep for more than a century. These herds were once tended by Basque sheep-herders imported from Spain when no Anglo would take the lonely, harsh work of moving flocks from pasture to pasture, year after year.

These Basques, and the Anglos who employed them, lived on the edge of civilization, respecting one another in ways that seem all but impossible in today’s ethnically fractionated society. Pictures of both cultures adorn the walls of Bordertown, weathered, stolid men with names like Charley and Pete and Pasqual and Hector.

Pictures of Snake Valley historical events are there, too. In the winter of 1949, thousands of sheep, cattle and horses were endangered by snowfalls that drifted as high as a house. An epic undertaking called Operation Haylift, which utilized National Guard C-119 cargo aircraft and D-12 combat Caterpillar bulldozers saved isolated ranches, flocks and herds. It was so famous that I can remember reading about it in Life Magazine when I was six years old.

I was also drawn to another childhood image. Several paintings, etching and prints of the sheepherder’s best friend are prominently displayed. Black-and-white Border Collies, native to Scotland. They, like the sheepherders, came to the dry, rocky playas and foothills of the west to do the things they do best – drive, circle and protect the woolies who, as any farmer knows, are not the smartest or toughest creatures ever to be domesticated.

“You should be here for the Sheepherder’s Ball,” said Chandra Conrad, Christian’s mother. She was referring to the annual Bordertown get-together of sheep men and women.

“There are border collie puppies all over the place. Breeders always have more than can be used for working flocks and they try to place them in good homes.

“Collies are wonderful, faithful dogs. The only problem is that they need something or someone to herd and if they don’t have sheep, they’ll herd their masters.”

Times change, and the Snake Valley changes, too. The Basque herders have been supplanted by dark-skinned men from the Altiplano of Peru. Australian shearers come to the United States on special visas, work in Nevada and Utah during what is the summer and fall in their own country, and then go home to do another six months of back-breaking work of the sort that Luke was doing when he met Meggie in The Thornbirds.

But the greatest impact on this remote landscape will come from outside. The Southern Nevada Water Authority, which serves Las Vegas, 400 miles to the south, has quietly bought up ranches in Snake and neighboring Spring Valley over the last several years. Only recently has the purpose of the buy-outs been revealed. SNWA, which must provide irrigation for 53 golf courses and untold numbers of casinos and tourist traps, intends to build a 48-inch pipeline that would cost $15 billion.

The plan is to take 137,000 acre-feet of water per year from Snake Valley and adjacent Spring Valley and ship it south. Here in the west, water is measured by acre feet. It’s the amount of water that is necessary to cover one acre of land to the depth of one foot.

Westerners are used to harsh environments. They are not the greenest people around, either. The land of the Basin and Range country is used to being exploited. The Interior West is easy to romanticize but much harder to inhabit without massive human public works.

Think of the Grand Coulee Dam.

Think of the solar and wind farms that are springing up in the remote places of the west that the average American is willing to sacrifice, so long as his own back yard is not disturbed.

But sometimes the logistics of grand construction projects stretch the infrastructure of the west.

While we stayed at Bordertown in our own fiberglass covered wagon, another prairie schooner was parked there. It was a diesel heavy hauler laden with a wooden box that looked like it could hold the power plant for the Starship Enterprise.

The massive load turned out to be a generator headed on back roads across six or seven states, from Milwaukee to a new megaresort and casino in downtown Las Vegas. The generator is so big it is powered by a 16-cylinder Caterpillar engine. And the generator is only a standby. The casino and resort normally run on power from nearby Boulder Dam.

The rig was driven by a scrawny, hollow-chested teamster who could have driven a stage coach a hundred and fifty years ago. His partner, a rotund, grizzled pilot car driver, was one of the nicest guys you’ll ever meet. He could have ridden shotgun on that stage.

We chatted them up and heard tall tales of ruptured air-brake lines that locked up 40 rubber tires in a gigantic cloud of blue-white smoke. And the seven per cent downgrade dropping from Bob Scott’s Summit to the antique mining town of Austin, Nevada. These guys are the genuine article. They know how to do things, big things. They make the world work.

Two days after those two characters pushed west from Bordertown, they arrived in Las Vegas. They were just in time to see the ceremony officially marking the beginning of construction on the new casino. The Governor was there and so were dozens of southern Nevada dignitaries. I tell you, it was grand.

The hubbub was warranted, in many ways. The new megaresort will have 3,000 rooms. It will generate thousands of jobs. Needed jobs. That’s grand for Vegas, which has been in a slump. This is the first major construction downtown in more than five years. Also not surprising, it is financed by Chinese investors. They are about the only ones who have money to invest in gambling spas.

If the SNWA pipeline goes through, the new megaresort, and Sin City generally, will have enough water for its near future, and probably for a few dozen new golf courses as well as pools, Venice-style canals, Bellagio-inspired 100-foot water features and vast green boulevards.

Oh, children, I tell you it will be wonderful.  It will be the dawning of a brand-new day. Progress will be served. That has been the story of the West for a couple of centuries. No reason it won’t happen again.

The casino generator and its marvelous transporter could have built the pyramids, Caesar’s Palace and of dozens of other worldly wonders. They can and will change the world as we know it.

But I also wonder, as does Elizabeth Lowell, what will happen to the Snake Valley and Spring Valley and to all the people, young and old, who call it home and who honor its traditions. You can’t take 169,000,000 gallons of water out of a desert and not destroy it.

Will Christian Conrad have a herder’s job in the place he loves so well as a teenager? Will the Anglo ranchers and the Peruvian herders and the Aussie shearers hang on, continuing a cycle as old as civilization?

And what will happen to the Border Collies?

When I was a child, our family had a Border Collie. Dodie was the smartest, sweetest, most honest dog I have ever known. She used to herd milk cows when there were no sheep around. That didn’t help milk production but we loved her anyway.

In January 1953, it became clear Dodie was on her last legs. My father built a little shed out of hay bales and lined it with straw so she could be comfortable and still watch over ten ewes on her last icy, moonlit nights.

She was going to watch over those sheep whether she had shelter or not. She died warm and content.

I’d like to think our children can still live in a world that has a place for dumb sheep and smart Border Collies and for the people who love them.

Hope is a good thing.