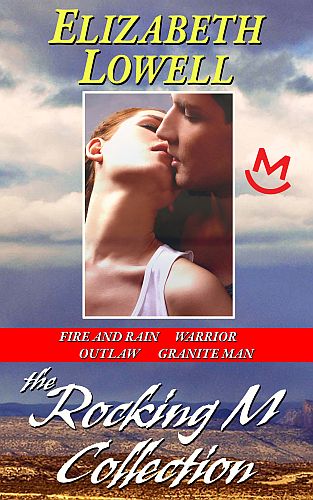 Four fiercely independent cowboys must learn to trust if they hope to find love.

FIRE AND RAIN (originally published January 1990 in Silhouette Desire #546 and numerous reissues in mass market paperback and trade paperback, and self published November 2013 in eBook format)
Luke MacKenzie was haunted by the Rocking M’s legacy of grinding women into dust. He has vowed never to marry—the bitter legacy of the Rocking M will end with him—until Carla arrives. His best friend’s little sister has grown up. Now Luke must choose between Carla and the ranch that is part of his soul.

OUTLAW (originally published February 1991 in Silhouette Desire #624, October 1994 by MIRA in mass market paperback, and self published February 2014 in eBook format)
Tennessee Blackthorn is ramrod for the Rocking M, a remote western ranch where Anasazi ruins have recently been discovered. His new job is to protect the ruins and the delectable blond archaeologist who wants nothing to do with him.

GRANITE MAN (originally published March 1991 in Silhouette Desire #625, January 1995 by MIRA in mass market paperback, and self published September 2014 in eBook format)
Cash McQueen had learned the hard way not to trust a woman. When he met Mariah MacKenzie, he thought she was like nearly all the women he had known, looking for a man to take care of every little thing for her. Mariah had come to the Rocking M looking for the brother she adored. Instead, she found Cash. Together they look for Mad Jack’s lost gold mine and find instead a blazing passion. But will passion be enough to convince a hard-rock miner like Cash to trust her, to return her love?

WARRIOR (originally published April 1991 in Silhouette Desire #631, April 1995 by MIRA in mass market paperback, and self published February 2015 in eBook format)
Nevada Blackthorn has spent too many years in too many war zones. He no longer believes in anything except his family. Then he meets Eden. He fights their mutual attraction as savagely as a wolf in a trap. She knows there is no guarantee that her love will be returned, yet still she loves.