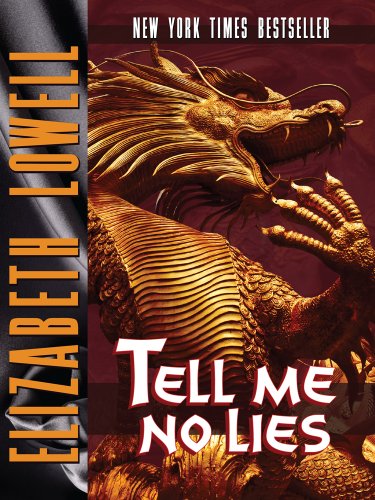 "The tension as Lindsay fell deeper into the seedy world of forgery and stolen art and international politics was so high that you could personally feel her pain and wondered if she would ever be the same. "

Tell Me No Lies

Lindsay Danner is an expert on Chinese bronzes who has an uncanny ability to separate fake from real. She is also a woman alone whose deeply buried memories bring her to screaming wakefulness in the small hours of the night. In the daytime, she has just one requirement of the people and objects in her life’honesty.

Jacob MacArthur Catlin was known under many names in the past, especially Dragon. Intelligent, ruthless, deadly, he became a legend in the shadow world of spies. His life was constructed of lies, deceit, and treachery. When he left that world, he never looked back. And never wanted to.

Then a man comes to Catlin bearing one half of an ancient Chinese coin. The past comes to dangerous life, a danger the sweeps up Lindsay. She is utterly unprepared for a life of lies. Catlin isn’t. Only working together can they survive layer after layer of deadly lies and shattering truths—and one of those truths is love.

Originally published in 1986 by Silhouette Books, September 2001 by MIRA Books and February 2006 by HQN.