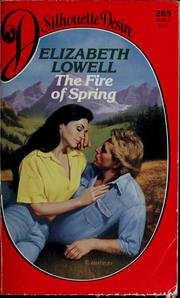 "Super Hot Passion...Leaves You Breathless To The End! "

The Fire of Spring

He believed in revenge.
Dawn Sheridan’s beautiful, calculating mother had destroyed Logan’s older brother, and Logan had sworn vengeance. When he won the Sheridan ranch in a poker game he should have been satisfied — but he wasn’t. Dawn, who resembled her beautiful mother so closely, was the perfect target for his anger. Yet Logan found that in hurting her, he came away wounded.

Dawn understood what Logan was afraid to admit — that what he wanted from her was love, not hatred. She gave him that love, risking everything to reach the gentle, caring man beneath his pain, knowing that if she lost, Logan would finally have the vengeance he sought.